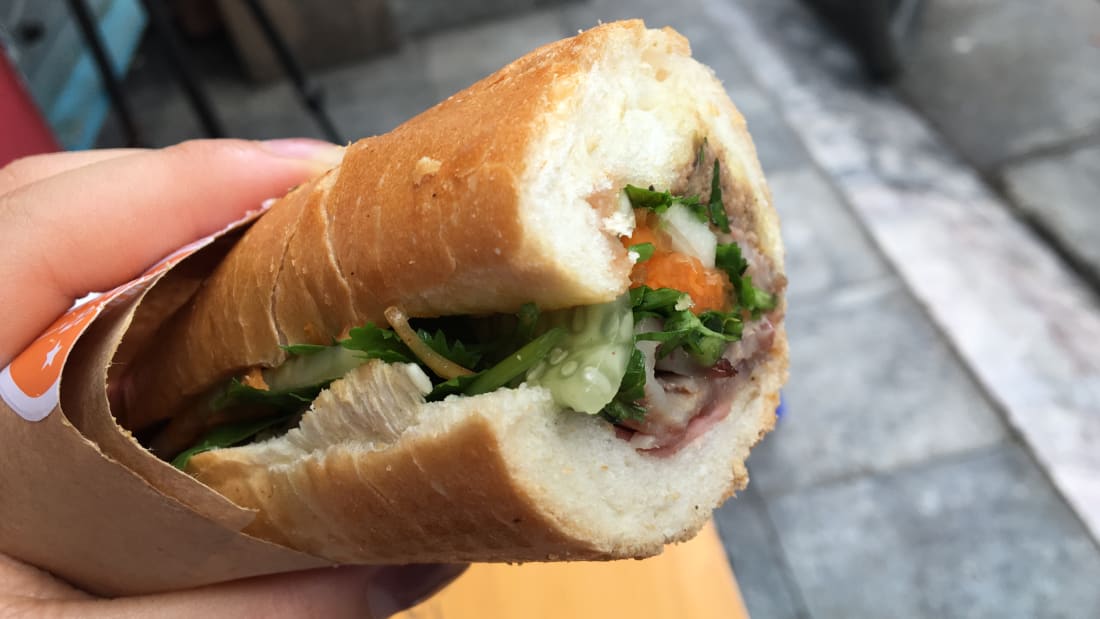 (CNN) — Vietnamese cuisine doesn’t win any points for complexity. Many of the most popular dishes can be made just as well on the side of the road as in a top-end restaurant.But it’s precisely this simplicity, the subtle variations by region and the fresh ingredients, that keep us pulling up a plastic stool for more.Here are 40 foods from Vietnam you can’t miss:

What list of Vietnamese cuisine would be complete without pho?It’s almost impossible to walk a block in Vietnam’s major destinations without bumping into a crowd of hungry patrons slurping noodles at a makeshift pho stand. This simple staple consisting of a salty broth, fresh rice noodles, a sprinkling of herbs and chicken or beef, features predominately in the local diet — and understandably so. It’s cheap, tasty, and widely available at all hours.

Hanoians consider cha ca to be so exceptional that there is a street in the capital dedicated to these fried morsels of fish. This namesake alley is home to Cha Ca La Vong, which serves sizzling chunks of fish seasoned with garlic, ginger, turmeric and dill on a hot pan tableside.Cha Ca La Vong may be the busiest but the service is a bit gruff and the food overpriced. Instead make your way to Duong Than in Hanoi’s Hoan Kiem district, where you’ll find plenty of more affordable but just as tasty options.

A good banh xeo is a crispy crepe bulging with pork, shrimp, and bean sprouts, plus the garnish of fresh herbs that are characteristic of most authentic Vietnamese dishes. To enjoy one like a local, cut it into manageable slices, roll it up in rice paper or lettuce leaves and dunk it in whatever special sauce the chef has mixed up for you.Banh Xeo 46A has mixed reviews but judging by the crowds that swarm there each night they must be doing something right. Banh Xeo, 46A Dinh Cong Trang, District 1, Ho Chi Minh City (HCMC)

This pork noodle dish from Hoi An is a bit like the various cultures that visited the trading port at its prime. The thicker noodles are similar to Japanese udon, the crispy won-ton crackers and pork are a Chinese touch, while the broth and herbs are clearly Vietnamese. Authentic cau lao is made only with water drawn from the local Ba Le well.

Some might call it river weed — with good reason — but that doesn’t stop the masses from scarfing down platefuls of morning glory, usually stir-fried and seasoned with slithers of potent garlic. Rau muong is common at Vietnamese restaurants and beer gardens.Chung Den Bia Hoi, 18B Hang Cot, Hoan Kiem district, Hanoi

Vietnam’s bite-sized crunchy spring rolls might not enjoy the same popularity as their healthier fresh equivalent, but they deserve a special mention. The crispy shell with a soft veggie and meat filling dunked in a tangy sauce gets the gastronomic juices flowing before a main course. In the north these parcels go by the name nem ran while southerners call them cha gio.Bun Cha, 1 Hang Manh, Hoan Kiem district, Hanoi

These light and healthy fresh spring rolls are a wholesome choice when you’ve been indulging in too much of the fried food in Vietnam. The translucent parcels are first packed with salad greens, a slither of meat or seafood and a layer of coriander, before being neatly rolled and dunked in Vietnam’s favorite condiment — fish sauce.Quan An Ngon, 18 Phan Boi Chau, Hoan Kiem district, Hanoi

Central Vietnam’s take on noodles caters to carnivores with its meaty broth and piles of beef and pork. The thick slippery rice noodles also make for a heartier meal than noodles found in the north and south.You don’t have to go to Hue to enjoy this dish; if in Ho Chi Minh City try Tib Express, 162 NguyenDinh Chieu, District 3, HCMC

This dainty variation of a Vietnamese pancake has all the same tasty ingredients but is a fraction of the size. Each banh knot can be scoffed in one ambitious but satisfying mouthful. The crunchy outside is made using coconut milk and the filling usually consists of shrimp, mung beans, and spring onions with a dusting of dried shrimp flakes on top.Co Ba Vung Tau, 59B Cao Thang, District 3, HCMC

Got the sniffles? Opt for ga tan, a broth that’s Vietnam’s answer to the proverbial cup of chicken noodle soup. Sure it’s not quite how your mother used to make it, with its greenish tinge from the herbs and hunks of chicken parts, but it’s worth a try if you’re needing a Vietnamese tonic.Try this at one of the street stalls on Hanoi’s Tong Duy Tan aka Pho Am Thuc, or “Food Street,” Hoan Kiem district, Hanoi

Vietnam’s banana flower salad packs a much bigger punch than a typical plate of mixed greens. Banana flowers (thick purple lumps that will later turn into bunches of bananas) are peeled and thinly sliced then mixed with green papaya, carrots, and cilantro along with chicken and a heavy-handed pour of a salty fish sauce dressing and crunchy peanuts.Highway 4 restaurant, 3 Hang Tre, Hoan Kiem district, Hanoi

This bowl of noodles comes sans broth, keeping the ingredients from becoming sodden and the various textures intact. The tender slices of beef mingle with crunchy peanuts and bean sprouts, and are flavored with fresh herbs, crisp dried shallots, and a splash of fish sauce and fiery chili pepper.67 Hang Dieu, Hoan Kiem district, Hanoi

This chunky blend of fresh tropical fruit in a cup is the perfect local treat when the heat of Vietnamese summer starts to wear you down. It could be considered a healthy alternative to ice cream — if you stick to the shaved ice variation — but for the full experience it’s best had with diabetes-inducing condensed milk mixed in.

KFC may be everywhere in Vietnam these days, but skip the fast food for the local version. Honey marinated then grilled over large flaming barbecues, the chicken legs, wings and feet served are unusually tender, while the skin stays crispy but not dry.Viet Ha on Ly Van Phuc, Dong Da district, Hanoi

Pho xao may just be a slightly healthier take on my xao — but the beauty is in the details. The flat, smoother pho noodle doesn’t crisp up like its pre-boiled instant cousin. When done well the outer edges acquire a browned crunchiness, whilst the center stays soft and glutinous. This dish tastes best with a fried egg and seasoned with chili or soy sauce.26 Nguyen Khac Sieu, Hoan Kiem district, HanoiHow to photograph Hanoi like the city’s Instagram stars do

Vietnamese “egg coffee” is technically a drink but we prefer to put it in the dessert category. The creamy soft, meringue-like egg white foam perched on the dense Vietnamese coffee will have even those who don’t normally crave a cup of joe licking their spoons with delight.In Hanoi, follow the tiny alley between the kitschy souvenir shops at 11 Hang Gai into the clearing, and up several flights of increasingly dicey stairs to pair your ca phe trung with an unbeatable view of Hoan Kiem Lake.

Vietnamese are masters of wrapping their food. Bo la lot is neither raw nor deep-fried, but flamed on an open grill to soften the exterior and infuse the betel leaf’s peppery aroma into the ground beef inside.3T Quan Nuong, 29-31 Ton That Thiep, District 1, HCMC

Savory sticky rice is less of an accompaniment to meals in Vietnam, more a meal itself. The glutinous staple comes with any number of mix-ins (from slithers of chicken, or pork to fried or preserved eggs), but almost always with a scattering of dried shallots on top.Xoi Yen, Nguyen Huu Huan, Hoan Kiem district, Hanoi

These rolled up rice flour pancakes are best when served piping hot, still soft and delicate. Although seemingly slender and empty they have a savory filling of minced pork and mushrooms. Zest is also added by dunking the slippery parcels in a fishy dipping sauce.